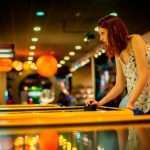 Is there a greater one-on-one test of skill than air hockey? This thrilling game, developed in the late 1960s by Billiard manufacturing greats Brunswick Billiards, has a simple enough concept. Two players face off, using the air hockey mallets to knock the pucks past their opponent’s defenses.

The rudimentary premise, however, belies the intense level of skill necessary to compete at the top-tier of play. Indeed, air hockey’s competitiveness had led to no end of tournaments and professional-style face-offs between those that have mastered the game.

If you want to increase your ability at this contest of skill, whether for fun or to begin your career as a competitive player, you’re going to need a suitable table to do it on.

Read on to learn which is the best air hockey table overall.

Note: Some of the links below are affiliate links. You won’t pay any more for the item but I will get a small commission that I then use to help cover some of the web hosting costs for this site. Your support is very much appreciated!

The Nature of Air Hockey Tables 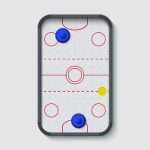 There are a great many varieties of Air Hockey tables out there, but for the purposes of this guide, we’re going to stay away from options like portable Air Hockey tables and multi-game tables, instead focusing on dedicated Air Hockey tables that beginners, intermediates, and advanced players can appreciate. There are a few things to look at when evaluating Air Hockey tables, each of which will figure into the table’s overall quality and how well it will play.

Size is the first factor. If you can, look for something full-sized to give yourself plenty of room to play on. These tables measure 8-feet, though, you can find smaller models to fit into more compact rooms if you need to save space. In cases where a full-size table won’t fit, you could instead opt for a 4-foot, 5-foot, or 6-foot model.

Materials are the second thing to examine. The best tables are constructed from solid wood, have very sturdy legs, and can support both the weight of the table and of adult-sized players leaning and straining on them in their attempts to gain a competitive advantage. Non-wood tables might be cheaper, but they’re nowhere near as durable.

The table construction isn’t the only thing to look out for here, mind you. You should also consider your rink wall construction. Strong nylon and solid aluminum are the best material choices, as they give the pucks a good amount of bounce and will last longer than substandard materials.

You’ll want to pay close attention to the air motor your table has installed. It’s called Air Hockey for a reason, remember? The motor supplies the air to the playing surface that the pucks glide on. A weak motor equals weak air flow, and hence, substandard levels of play. A good motor will supply plenty of air, run quietly, and won’t spontaneously overheat mid-game.

Another factor to watch out for is the table style. Do you want a basic table that doesn’t have a lot of integrated features? These will run you less money, but on the flipside, you won’t be able to make use of cool extras like electronic scoring features, victory music, sound effects, and the like. Pro-level players usually prefer the simple tables, though, as they are better constructed and allow for more focus on the game itself.

The arcade-style tables include all the bells-and-whistles, but you should be prepared to pay more for them. In addition, they could be seen as tacky, and if you want your Air Hockey table to serve as tasteful decoration, you might be better off with a basic setup.

Last, we can’t forget about price. How much will you be willing to pay for your setup? You could find a cheap table for a few hundred dollars, but will it last? Inexpensive tables have a reputation for being easy to break, so you might want to set your sights on at least a middle-of-the-road, or even more expensive model if you want something quality that will stand the test of time (and your forearms).

Here’s a sampling of what’s out there. These tables represent a mix of sizes, features, price, and overall quality. Each has its own strengths, and a few might have some weaknesses as well. 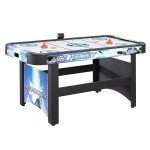 We’ll look at a relatively inexpensive option from Hathaway first. They’re known for producing several table-top games, and espouse pro-consumer values like eco-friendliness and the like to make their products more attractive. Aside from that, they supply a great many novice-class gaming products, of which the Face-Off is a member.

What’s Great About the Hathaway Face-Off?

What’s Not So Great About the Hathaway Face-Off? 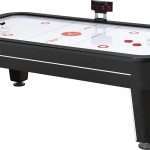 Adding the name of a Canadian city helps put you in the hockey mood. Viper has a history of producing good recreational games, and the Vancouver Air Hockey table is representative of their overall quality level—mid-range, and not too expensive.

What’s Great About the Viper Vancouver?

What’s Not So Great About the Viper Vancouver? 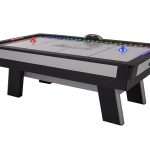 Atomic has been in the business of producing table game setups for a while, and their products are generally well-received, with notes about the quality and construction holding them in high regard. The Top Shelf is one of their better models, and while it isn’t a basic all-wood table, this arcade style offering is pretty close to something a high-level player would be comfortable using.

What’s Not So Great About the Atomic Top Shelf?

In Summation: Which Is The Best Air Hockey Table?

Air Hockey is fun, exhilarating, and fast-paced, but only if you have the right table to play on. Cheaper options like the Hathaway Face-Off might do well as a kid’s or starter table, but for full-on action, the Viper Vancouver might be the best air hockey table for most people. If you’re not dead-set on having all the flashing lights and extra sound effects the Top Shelf offers, the Viper’s simpler-but-still-effective nature is going to do more than enough for you, and you’ll save a bit of money in the process.