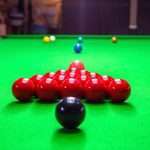 The sport goes by many names: pool, pocket billiards, six-pocket if you’re a bit older. There are hundreds of pool games that you play, though the most common game types include Eight-ball, wherein the objective is to pocket all the solid or stripe balls first, then sink the eight ball to claim victory.

Other popular game varieties include Nine-ball, Three-ball, One-pocket, and several others. The objective for each style of pool is different, but they all have one critical detail in common: you can’t play them without a pool table.

Furthermore, you need to make sure you get the right pool table, as it’s easy to mistake other similar tables for the one you need or get a pool table that won’t properly do the job.

Read on to learn which is the best pool table overall.

Note: Some of the links below are affiliate links. You won’t pay any more for the item but I will get a small commission that I then use to help cover some of the web hosting costs for this site. Your support is very much appreciated!

A pool table, as the above description would indicate, has pockets to sink the balls (six, to be precise). There’s a pocket on each corner of the table, and two in the center. So, what should you be taking into consideration while you’re looking at pool tables?

Size is a major factor, as it will determine whether it will fit into the space you’ve designated in your home to use as a personal pool area. For small spaces, a six-foot table might be all you’re able to manage. Pool tables range from six to ten feet, however, with the largest table varieties usually reserved for specialized pool establishments, pool halls, if you will.

Commensurate with size is the weight of the table. This is determined by both the size of the table and the materials used in construction. Most tables contain a core that is composed of a mixture of concrete and wood, or simple plywood/particle board.

The all-wood construction is lighter, but also cheaper. For most serious players of the game, a slate table is preferable as it feels sturdier. The drawback is that the heavy slate can sometimes put undue pressure on the table construction, causing the rails and other components of the table to warp after a few years.

Speaking of table construction, solid wood is the superior options. Pool tables made from pressed wood will provide an adequate level of play, but solid wood far outclasses it in nearly all aspects. Rails made from solid wood offer more bounce, support the table better, and does not deteriorate as quickly.

High-grade cloth is your best choice for the table surface, worsted cloth varieties from the best manufacturers (like Brunswick, or Simonis) being an optimal choice. As for the pockets, real leather is preferable (since it lasts longer). However, vinyl pockets will still give you several years of sturdy use (and are usually less expensive).

Lastly, you’ll want to make sure that the overall design and price of the table is one that fits your personal sensibilities. You’ll doubtless find many fine options in your search, and should expect to pay a bit extra for more ornate tables, particularly if they are constructed from all hardwoods.

As mentioned, there’s wide range of manufacturers, each putting out great tables with different individual characteristics. We’re going to look at three that may catch your eye.

Click on any link below to learn more about the item on Amazon. 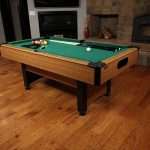 The Mizerak brand is named after late pool legend Steve Mizerak, AKA “the Miz.” Overall, they are known for producing a rather well-received line of eight and nine-foot pool tables, but the Dynasty is a “space saver” design, intended for use in tighter quarters. It measures about six-and-a-half feet, comes with cues and a complete set of balls, and has a few features to enhance the game.

What’s Great About the Mizerak Dynasty?

What’s Not So Great About the Mizerak Dynasty? 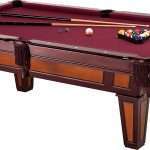 The Fat Cat name is associated with quality and elegance. That’s mirrored in the design of the Reno II, an updated version of their classic Reno pool tables. This version includes a red-cloth playing surface as opposed to traditional green, adding an air of liveliness and luxury that few can imitate. The advantages of the Reno II go beyond improved looks, however.

What’s Not So Great About the Fat Cat Reno II? 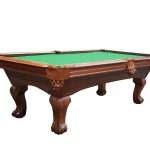 By some estimates, Empire represents the Cadillac of pool tables. Elegant, well-constructed, and expensive. That price is worth it for many pool enthusiasts, however, as the Empire line is manufactured with them in mind.

What’s Not So Great About the Empire USA Signature Series?

In Summation: What Is The Best Pool Table?

There’s a wide range of factors that determine the worth of any given pool table. The Empire USA Signature Series has high marks in all categories, and while it’s pricier than the other options presented, it is the highest-quality of the bunch. It has the slate playing surface, is made from hardwoods, and heavy so that it will stay in place while you practice or compete. If you have the space, the money, and the time to put it together, it’ll provide the most value and the greatest level of play. Overall I think it is the best pool table for most people.