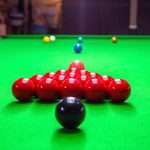 Billiards is often referred to as a cue sport. It has been a popular sport since the 15th century where it first emerged in France.

It evolved from an outdoor sports games that involved sticks and balls on a lawn.

Read on learn the full billiards rules as well as tips for playing the game.

First is the table has no pockets, and the goal is to strike the cue ball off the opponent’s ball or railing.

The second is the fewer amount of balls. In pocket billiards and Snooker, the object is to sink colored balls into the pockets by striking them with the cue ball.

Diamonds run along the table, which can be used in the geometric striking strategy. The rail where the first person to break stands at is called the short. The opposite end is the foot rail and the rails that run long along the table are the side rails. The table is green because this color is less sensitive to the human eye and can be looked at for extended periods of time.

Lagging determines who goes first. The red ball is placed on the foot rail and the opponent’s cue ball at the head. The shooter must hit the red ball for it to be legal and get the ball to return closest to the front end. Usually, the winner of the lag opts to go second.  The first player must hit the red ball. Technically, as long as, you hit both balls you receive a point.

About the Cue Stick and Balls 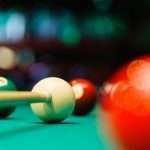 The billiards cue is a short stick with short ferrule – the white part located at the tip – and thick butt. There are three balls. One white cue ball, a white cue ball with a black spot called the spot and a red object ball.

The Points and Objective

You get points by hitting both balls on the table. There are variances on how you strike the ball:

3 points for potting off the red ball.

2 points for potting off the opponent’s ball.

2 points for a cannon. Each time a player hits the opponent’s cue ball and object ball with one shot, it is called a cannon.

The game pool can be played with two or three people.

Cue sticks are about 58 inches long; longer or shorter ones are also available, depending on the player’s height.

The balls are solid colors and striped with even and odd numbers. The two most important balls are the 8 ball and cue ball – which is the only ball to be directly hit during the game.

A break is when a player either straight or at an angle hits the collected or racked balls so that they scatter. A scratch is when the cue ball jumps off the table or rolls into a pocket. In such case, the opponent then is allowed to take the ball and place wherever on the table to take a shot.

The balls are placed in a triangle to be racked. A player breaks. If a ball goes into a pocket they the player must continue to hit the other balls of that kind – stripped or solid – for the duration of the game.

Each player hits their respective balls until the last ball that is left on the table is the 8 ball. The first player to hit the 8 ball in a pocket wins the game.

If a person scratches when attempting to hit the 8 ball he or she loses the game.

If a person hits the 8 ball in a pocket before all the other balls are cleared from the table, the player automatically loses as well.

Each ball as a point associated with it:

The game is played with 2 players. A coin is flipped to decide who goes first. The first player must try to get the cue ball to hit one of the racked red balls.

The object of the game is to get as many numbers of points as possible by hitting the red and colored balls into one of the six pockets. Sinking the balls in the pockets is called “potting.”

First, the players pot in the red balls and then when those are all gone, the colored balls – from the lowest point value to the highest.

Each player gets a turn provided he or she is able to pot a ball into a pocket. If a player misses, it is the opponent’s turn to shoot.

The Stroke, Strike, and Stance in Billiards

If you are right-handed, most people use that hand to control the base of the stick and the left for the tip. If you are left-handed, then the opposite would work nicely.

For proper hand positioning, place the tip of the cue stick on top of your thumb and curve the index finger over the upper part of the tip. This forms a closed bridge that will keep the stick from slipping sideways.

Your hand that is shooting should be loose on the butt of the cue stick, while you thumb and index finger should be tight on the stick.

You can also shoot with an open bridge that is a “V” with the thumb and index finger.

Align your body with the shot you are trying to make. This line would be with the cue ball and the object ball. The foot that corresponds to your shooting hand should be at a 45-degree angle with this line.

When lining up your strike, look for a spot on the cue ball with the practice pendulum-like movements of your arm. The best hit is usually with the cue tip hitting directly in the middle of the cue ball.

Hit the cue ball as if you were hitting the object ball. Keep your eye on the ball and remain focused on what you’re doing.

Look at your angles and see what your best shot is – even if it isn’t to get points or land in a pocket. You may want to make it difficult for your opponent to have a shot.

Make practice shots before taking the actual one. You aren’t actually hitting a ball but in this way you relax your arm and you can get your aim.

There is a diamond system. The diamonds on the rail have a number.

Billiards is played all over the world and there are many variations of the sport.

The way in which a cue ball strikes another ball determines how the other balls travel. By experimenting with hitting the cue ball in different ways, you’ll learn how to use predictions and accurate shots to your advantage.

If you want to read more on the general rules about Carmon billiards you can visit Billy Aardd’s Club or Snooker at Masters Traditional Games. You can read up on pool geometry at About.com.