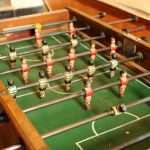 No matter your level of play, though, the common thread is that you need a good foosball table to get started, so read on to learn which is the best foosball table overall. END_OF_DOCUMENT_TOKEN_TO_BE_REPLACED 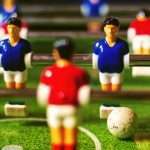 You can find this game in many college dorms, bars, recreation centers and military day rooms in America. And although it’s been popular in this country for more than 50 years, the details and strategies of the game are a mystery to most of us.

What game is this? Foosball!

Also called table soccer, while the goal is somewhat simple, foosball rules and strategies can be complex.

A typical foosball table has eight rods and nine balls are used per game. There are usually either two players or two-person teams.

The first person or team to get the ball into the opposing team’s goal with five of the balls wins the game.

Sounds easy, right? Well, it can be surprisingly hard to get good at this game. Read on to learn more about mastering all the foosball rules. END_OF_DOCUMENT_TOKEN_TO_BE_REPLACED