If you’ve been to a party in the last decade, chances are you’ve witnessed or perhaps even participated in a game of beer pong.

The game harkens back to the ‘70s, where it was featured in a New York Times article.

As a party favorite among young adults (and older ones, too) across the nation, beer pong is fast, fun, and easy to learn. All you need are a few supplies, and few friends, and few minutes to learn the rules.

This article will help you with basics, plus a few extras you can use for your next get-together. Read on for a quick overview of the rules of beer pong.

When beginning a game of beer pong, you will be standing on one end of the table, facing an array of ten plastic cups on the other end, each filled with water, alcohol, or another party liquid of choice.

Your opponent will be standing on the other end, facing an identical array of cups on your end. You and your opponent will take turns shooting small balls (typically ping-pong balls) into each other’s cups.

Your goal is to land a ball in every one of your opponent’s cups before he or she does the same to yours.

The (typical) twist: every time someone lands a ball in a cup, the other person must drink the contents of that cup. 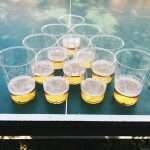 To properly play a game of beer pong, you will need 4 essential supplies:

A Table: This is your playing field. Any table will do, though ping pong tables and plastic collapsible tables are most commonly used.

Make sure your table is sufficiently long to ensure that beer pong shots aren’t too easy, but short enough that players won’t spend all night trying to land a shot. B-Pong.com recommends an 8-foot long table as the standard table for beer pong play.

Balls: Beer pong is typically played using ping pong balls, which are lightweight and affordable. They can also bounce, which is an attribute that can be incorporated into the game (see “Extra Rules” below).

Cups: 8oz or 16oz Solo cups are standard for beer pong, though any plastic disposable cups will do. Cups made of a stronger material such as glass, stone, or thicker plastic don’t work as well since ping pong balls bounce off of them with more force.

Liquid: Believe it or not, liquid plays a larger role in the game of beer pong than simply an excuse for drinking. Without liquid in the cups, thrown ping pong balls will simply knock their targets over, or bounce right out.

Beer is typically used, though mixed drinks and other alcoholic beverages can also be used. (For a non-alcoholic alternative, use water, soft drinks, or energy drinks.)

Fill your cups about halfway for an optimal beer pong shooting experience.

Before Beginning: Set up your table in a spacious area. Players typically stand behind the table’s shorter sides, with the longer sides used for the field of play.

Arrange your cups in a pyramid fashion, with 4 cups in the base and 1 on top. The tops face the middle of the table, while the bases line the edge.

Fill each cup halfway with a liquid of your choice.

There are numerous extra rules and amendments to the game of beer pong. While the essential game usually remains the same, no two parties typically play the exact same style of beer pong. When going out on the weekends, here are just a few extra beer pong rules to look out for. (For a comprehensive list of extra rules, visit Bpong.com.)

Bouncing: A player may attempt a bounce shot at any point in the game. If he or she makes the shot, then 2 cups are removed. However, the opposing player may swat an attempted bounce shot away.

Death Cup: There are several variations on the “Death Cup” rule. One variation states that if a player is drinking from a cup that was just removed and the opposing player lands a ball in that cup, the game is automatically over and the shooter wins. Another variation stipulates that the “Death Cup” is one that is made by two balls in the same turn. In this event, 3 cups must be removed by the defending player.

Island: Once per game, a player may call “Island” on a cup that is not touching any other cups on the table. If this player makes the “Island” cup upon calling “Island” on that same turn, that cup and another cup must be removed from the table.

On Fire: Most beer pong matches will incorporate the “On Fire” rule. After a player hits two cups in a row, he or she may call “Heating Up.” If that same player then makes his or her next shot, he or she may call “On Fire,” and may shoot until missing. Many parties play a variation on this rule, where cups made during an “On Fire” turn mean that 2 cups must be removed from the table for every cup made.

“Celeb” Shots: To get everyone involved in the game, players are allowed to use anywhere from 1-3 “Celeb” shots per game. During a Celeb shot, a person at the party may step in and take a shot for either player. At many parties, made Celeb shots are worth two cups.

Bring Beer Pong to Your Next Party

Whether you’re a casual drinker, weekend warrior, or straight-edge partier, beer pong and its non-alcoholic alternatives are great for any social scene. Knowing the basic rules of beer pong is an essential for anyone looking to host or attend a 21st-century house party.

If you are looking for more details on beer pong and its rules, or simply want to spice up your next beer pong competition with a few new house standards, Bpong.com and Party House Pong have a wealth of information available on their websites.

Enjoyed this article? Let us know! Tell us about a beer pong rule that you and your buddies use, a crazy beer pong story, or leave suggestions to help new players get into the game.

Who knows, we may even receive a few welcome words of wisdom from a past World Series of Beer Pong champion!