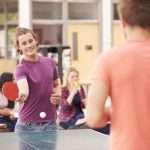 Table tennis, also known as ping-pong, is a popular Olympian sport which is typically played inside, but can also be played outside as a recreational activity.

The sport is a game that is relatively easy to pick up but hard to master, which is why it has millions of fans, major tournaments, and even superstar players.

Read on to learn all the table tennis rules and how to play like a pro.

The equipment needed to play table tennis is reasonably accessible compared to some sports. All you need to play is a racket for each player, a handful of ping pong balls, and a table made for the game.

When it comes to table tennis, there are a few standards and guidelines that need to be followed.

The first thing to know is that table tennis is played by either two (singles) or four people (doubles).

If four people are playing, they will be in teams of two competing against the other two participants.

In the case of two people playing, they compete against each other.

The goal of table tennis is pretty simple.

The primary objective of the game is to win the game by getting more points than your opponent in more than half of the games to be played.

For instance, if you choose to play three matches, to win you would need to get more points in two or more of those matches.

Each game is played until a team or player gets eleven points (or sometimes twenty-one points).

Many rules make up the sport of table tennis. Some of these are implemented more often in professional settings, but many rules are also used for casual play.

These rules apply to starting the game, serving the ball, returning the serve, and more. The most common rules that you need to know will be explained for each phase.

Like most sports and games, your first decision is who is going to serve first.

The rules state this is decided by lot, which means tossing a coin, and allowing the winner to serve first, make his opponent serve first, or choose a side of the table he or she prefers.

If the winner of the coin toss chooses to serve first or make his challenger go first, the opponent will choose which side of the table to play from. In the case where the winner chooses a table side, the opponent would decide who serves first.

Scoring a point is simple, in theory.

In order to do so, you have to keep the ball in play for longer than the opponent. However, there are many ways in which a player may lose a point.

Knowing each of these is important in order to ensure correct scoring of the game. Here are the ways you can lose points:

There are many different strokes involved in table tennis. However, for the beginner, a few are more important to understand than the others.

The smash, block, push, and drive are the four most common methods of moving the ball.

Regulations state that you may practice up to two minutes before the match. The match must start immediately afterward.

You are expected to be in continuous play in order to avoid time-washing. If an umpire is there, they will discourage these acts and issue warnings.

However, breaks of two sorts are allowed:

You may also take a break of a minute between games. You may not remove your racket on the break in order to ensure no changes are made during the short pause.

That sums up the basics of table tennis. You should have a good idea of what equipment to buy, how the play goes throughout a match, rally, and game.

In addition, we covered standard rules and common strokes used in the game of table tennis. When playing your first game, you will be ready, and hopefully, you can get a win!

Of course, there is far more information available for those who are interested.

You can find great reading material on the USA Table Tennis website, the North American Table Tennis site, and in many physical books as well.

Check some of those out, add the information here, and you’ll be well on your way to being a ping-pong champion. Or at least knowing all the table tennis rules when your friends next want to play!